Daily newspaper magazine subscriptions - French news magazines. 70 years of serving the French press
The mission of the UNI-Presse association is to encourage and promote French culture and language throughout the world. Today UNI-Presse offers publications by all of France’s main publishers, and across all sectors of publishing: general interest, scientific, medical, legal, technical, literary, etc.
UNI-Presse is the bridge between its member publishers and millions of French-speaking readers throughout the world, as well as working for the promotion of the French press in every corner of the world. UNI-Presse is financed by the subscriptions of its member publishers, and by a grant from the French Government.
Meeting those who like to read in French...
UNI-Presse works in collaboration with existing French cultural networks throughout the world: the Alliances Françaises, Chambers of Commerce, the cultural services… UNI-Presse organizes itinerant exhibitions, meeting those who, wherever they are in the world, like to read in French. UNI-Presse has a “French Press” stand at all the major Book Fairs.
Subscribe to the French press from anywhere in the world !
Thanks to UNI-Presse, you can subscribe to over 600 publications from the French Press. Subscribers can sign up in our website or contacting international sales representatives.
Managing subscriptions for institutions
To help major government offices and institutions manage their subscriptions, UNI-Presse centralizes all the subscriptions of the various French Government ministries which have to be sent abroad (to embassies, consulates, cultural centers, French lycées, etc.).

Find us in the mobility guide
Paper version     Ebook Version 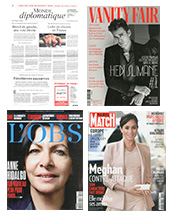 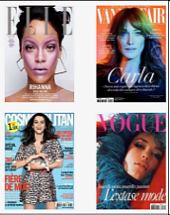 UNI-Presse proposes a wide range of magazines which are specialized in lifestyle such as cooking, fashion & style. Receive children & teens magazines (baby, childhood, teens) in 190 countries